Helllooooo my lovelies!!! I have missed you, I won’t make any promises here but I hope to commit to a better regular post upload. Life has been busy, its been actually a bit chaotic. A lot of anxiety related to care routines for Braden, new staff, new routine. Honestly it is all things we are in control of, its just not going the way we had hoped. I think we are heading back to where we began. 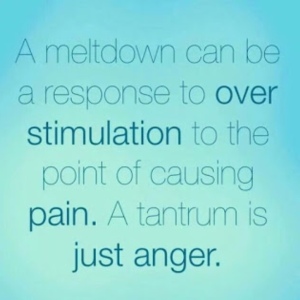 But let me explain a few things….as many of you know I am in a year of healing. I am learning, rebuilding and learning how to deal with many emotions. One thing I have had to “work on” is confrontation. I am dealing with how to become assertive without getting “angry”.
So here is my first confession…I have a tool box with all sorts of tools that I can use when dealing with difficult, frustrating situations. My problem is that I keep using the same tool when dealing with conflict. I am not reaching for any other tools, I keep using the same darn screwdriver.
Screwdriver = Anger 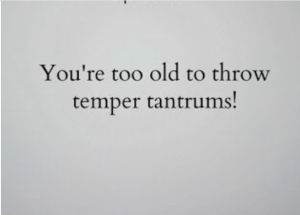 These past few years, as I have mentioned before I have become tired. With that I have withdrawn myself from many situations. I just don’t have the fight in me…most times my fights become incredibly tiring.
Let’s go back…
When I was 23 years old, I had a terrible car accident that severely paralyzed my son. During the first lets say post 15 years, I spent much of my time “fighting” for his rights. Eventually and fairly quickly I had learned when you have a “screaming mother, taking a temper tantrum in ICU” because her demands are not being met…people move pretty quickly. I got results immediately. Now I wasn’t a tyrant. I was a mother who was going to protect and provide her son with whatever I felt he deserved. MOST times I worked closely and comfortable with hospital staff. I really didn’t have a lot of conflict with them. I was blessed, they wholeheartedly met our needs as parents, patients and even co-workers. There was only a few times in the beginning years I became a monster with hospital staff.
I remember one incident, which we laugh about today. At the time I don’t think I had ever experienced this level of anger. Braden’s Orthopedic surgeon ordered a head, neck and back brace made specifically for Braden. It was custom made, and used after his first Spinal Cord Surgery. So Braden was in ICU recovering from surgery and this brace was applied. It kept him completely confined. It had a chin strap that kept his mouth closed, it made it so difficult for him to try to react to stimulus. He couldn’t open his mouth at all, he cried silently of course because of his tracheostomy. That was so hard to see, he made no sound but tears streamed down his face. I asked the nurse to remove the chin strap, and she refused. I told her I don’t care what protocol is…I am removing the chin strap ASAP. She then said “let’s leave it for now, and we will call DR.Viviani up when he gets the chance”.
Well this is where I had learned if you scream loud enough you get results…and really what are they going to do to a mother who is distraught while her son fights for his life? They can’t kick you out of ICU…well at least back then they wouldn’t dream of that.
So my big mouth demanded that the DR come to ICU immediately. They tracked him down, he was in the OR, but I told them to tell him to come up as soon as he gets out of the OR. I was loosing my mind over this brace and Braden’s discomfort. NOT to mention he didn’t write any notes saying we could hold Braden, If the DR didn’t write any notes about do’s and don’t’s then they didn’t let you do anything until permission was given. I get that today, being a nurse and all.
As a mother…I didn’t give a shit about his protocol or his do’s and don’ts.
He came right up after his surgery, it was about 2 hours later. He still had his surgery gown and hat on…lol I was actually impressed and very grateful. He came in, looked at the brace, removed the strap and agreed he didn’t need it. Then he gave permission for Paul and I too hold him, he wrote that out because I made sure of it. I thanked him for coming up so quickly, he was a great surgeon but he was quiet and reserved and difficult to get to know. He liked us…I know he did!

My temper tantrums continued through his school years, and once again if I didn’t get what I wanted I would just throw a fit, get really loud and eventually I would get what I wanted. At times I was relentless.

This has all changed, the last time we had a hospital admittance Braden was admitted to an adult ward. He is an adult, and he was initially sharing a room with an older gentleman. Well this isn’t going to work well for me..where am I going to sleep? I had two choices this very first night he was admitted. This is where my friends I have found myself today….
1, If I take a temper tantrum and demand he has a private room so I can spend the night, then technically they can call security and have me removed. Becoming a nurse taught me this.
2. Shut down.

I took the second.
And this has been my coping technique since. I don’t have the skills to negotiate, understand and listen to others if I disagree. SO I have been shutting down, I am frightened of who I become when I am angry. I have been letting Paul deal with all the conflict, I have been hiding.

I know I am capable of being assertive, I do have the ability, That grown up is in there, I just have to practice using the other tools.
I have some new skills, I have a plan.

I am not saying that I am immature. I do have control over my feelings and I do not go around throwing temper tantrums. When I do find myself overwhelmed with emotions, I do manage to remove myself before the crazy comes out. That says a lot…years ago I didn’t have that ability.
I have a situation in life that needs me to step up, and I need to remember that I am role modelling for my own children. They need a mom who is in control, a mom who can resolve conflict with confidence.

I suppose the best way to explain this would be to say that at a very young age I had learned how to resolve conflict and get exactly what I needed. When I was a 23 year old mother of a young medically fragile child, at times I’m sure my temper was enduring. Admired maybe from others looking in, “the fight in that little one is powerful”,

When you are a 45 year old, 5′ chubby mother of a physically challenged young man….the temper tantrums don’t look so…lets say cute~
Here I find myself frightened, self-conscious, and at times nervous of what my reactions too a problem will be. So I have some work to do. 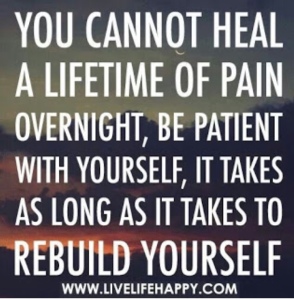 I am searching inside my tool box, pulling out a hammer! I’m gonna try to leave that screwdriver locked away safely in that box.
I have to train myself how to use the hammer, I don’t want to end up throwing it at some unsuspecting poor bastard. With my temper I can’t make any promises. 🙂

Well my lovelies, wishing you all the very best. I miss you~ Until next time good night and god bless~

Published by The Grace In Grief

Welcome to my blog~ My name is Chrissy. I’m the proud mom of two great young adults and happily married for 25 years to the love of my life. I am making this year 2018 the year I complete my memoir, i am bunkering down and completing this project that I started many years ago. I am finding it challenging reliving some of the moments that I have tried so hard to forget. Sometimes retelling a story can be soothing maybe even a time of healing. But living with PTSD has brought new threats to the peace I strive so hard for each day. My hopes with this blog is to share with you our story of tragedy, guilt, pain, perserverence, triumphs and love. To write about our struggles, battles, hopes and dreams after a devastating accident that left our son with catastrophic injuries. We have overcome staggering odds, fighting, laughing and striving for acceptance and equality. Working towards living our best life with a son in a wheelchair, a mother with guilt, a father with strength and a daughter to make us smile. It’s our story, it’s how we have found the grace in grief and how we can hopefully inspire you to do the same~xo View all posts by The Grace In Grief